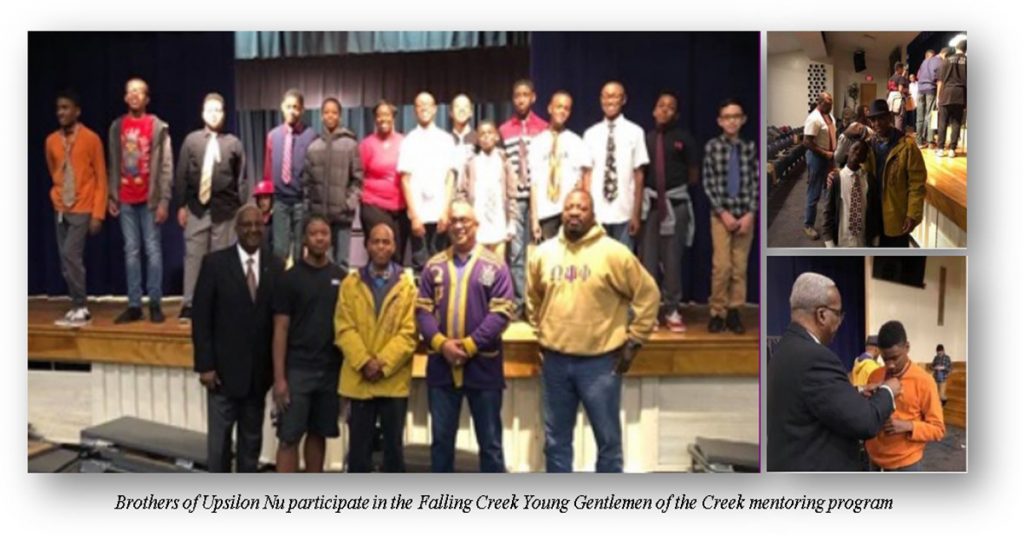 Richmond, Virginia, Thursday, November 14, 2019, Upsilon Nu came out to support the Annual Necktie program as part of the Young Gentleman of the Creek Program. This is the fourth school year for the boys mentoring program at the school. “We are very grateful for the continued support and necktie donations from the Upsilon Nu chapter. The Young Gentlemen gratefully appreciate Upsilon Nu members taking the time to assist with the necktie and bowtie tying tutorials at the ceremony. The teacher advisors for the group have some exciting activities planned for the boys, including: community service opportunities, cooking with a professional chef, field trips, reading fiction books together as a group, and we’re even going fishing next April,” stated Ms. Angela Harris, the mentoring program coordinator. 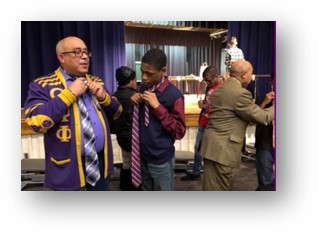 The purpose of this program is for selected boys in grades 6th, 7th, and 8th to participate in a youth empowerment, mentoring, and academic support group. Full participation from December until April is required. Brother James Hunter, Upsilon Nu’s Social Action Chairman and Basileus Michael Swain led several tutoring sessions for the boys. “They get the hang of it after a few times. The bowtie seemed to be more popular than the necktie this year,” stated Brother Swain.

The boys selected from hundreds of donated neckties and engaged with men in the community. A central component of participation for each young gentleman is to dress in professional attire two Wednesdays per month. In previous years, neckties have been donated by Gov. Terry McAuliffe, Sen. Mark Warner, Sen. Tim Kaine and former Secretary of the Commonwealth Levar Stoney, along with many other notable male figures in the Richmond region.