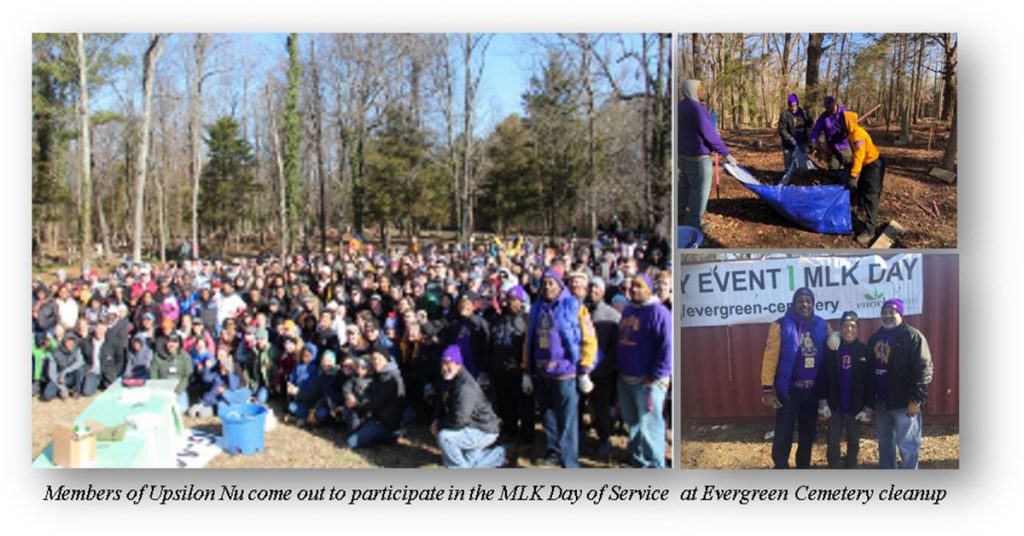 Richmond, Virginia, Monday, January 20,2020. Upsilon Nu chapter supported the Evergreen Cemetery cleanup effort as part of their MLK Day Of Service project. Evergreen Cemetery is a historic African-American cemetery in the East End of Richmond City, Virginia, dating from. Notable African-American Richmonders including Maggie L. Walker, John Mitchell Jr., A. D. Price, and Rev. J. Andrew Bowler are buried there. Much of the privately-owned cemetery is completely overgrown with kudzu or is returning to forest. The original organization responsible for the cemetery, the Evergreen Cemetery Association, made no allowances for perpetual care in its charter. In 1970, the association sold its more than 5,000 plots to Metropolitan Memorial Services, which soon went bankrupt. A group of African-American funeral-home directors later bought the site at auction.

Neglected, overgrown, and tucked away deep in the woods of the East End of Richmond surrounded by two landfills, Historic Evergreen Cemetery was easy to miss. That is destined to change now that the United Nations Educational, Scientific and Cultural Organization (UNESCO) has awarded this sacred site official designation as “a site of memory associated with the Slave Route Project” – one of the first in the world.

Upsilon Nu had supported this project for many years, when we decided to focus on several other social action projects in the community and we felt we were spread to thin. “But we knew we would get this program back on our social action agenda,” stated Brother Eric Monroe.