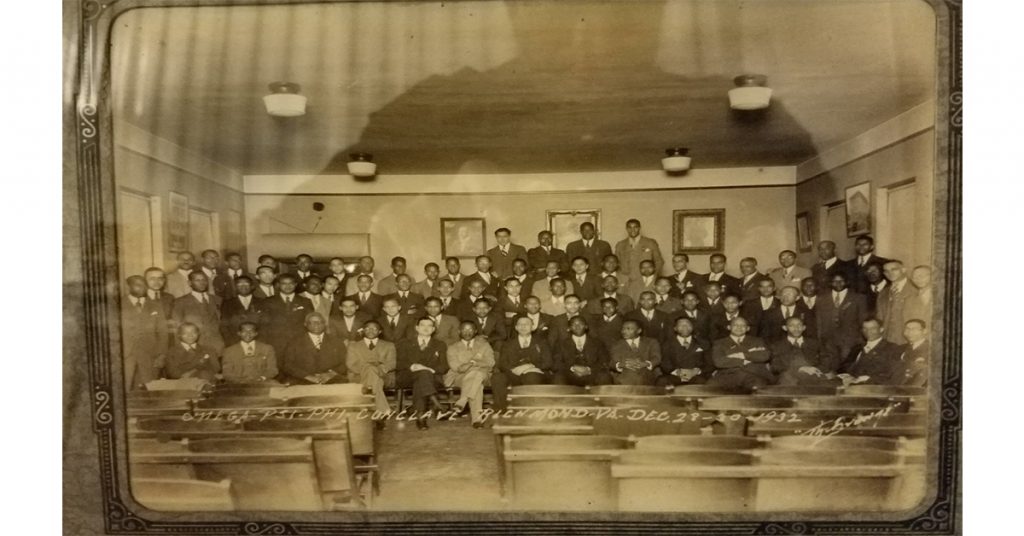 Sharing a wonderful photo of dignity, promise, and nobility this Monday. Brother Alfonso Morrell (2008 Beta Alpha Alpha) was kind enough to share this marker in time with the Third District History and Archives Committee. The photo was taken at the 1932 Grand Conclave in Richmond, Virginia. Seated 3rd from the left is Brother William E. Baugh, also known as "the Biggest Man in the Fraternity," and for good reason. On page 231 of the Dreer you will find a passage that reads "No brother ever served Omega with greater zeal, greater loyalty or more unselfish love than he whom we lovingly called the biggest man in the Fraternity, William E. Baugh." You will also observe seated 5th from the left Brother Walter H. Mazyck, who we know to have been equally imbued with the Omega spirit. If you look closely and with a curious eye you are sure to find other "wheels" in the photo (e.g. Albert Dent, Daniel B. Taylor, Parris V. Sterrett, and others to be sure).

Eight years prior, Mazyck penned an article that appeared in the 1924 Oracle the focus of which was on Omega's expansion coming out of the 11th Grand Conclave. In his article, Mazyck shared the reflections of then former Vice Grand Basileus, John W. Love, on the story of Omega's journey as told in the worthy tedium of Omega's fraternal, organizational, and administrative progress.

The History and Archives Committee found the highlighted passage in Mazyck's article to be a fitting caption for the photo that was taken eight years later and a fitting message for the brotherhood charged with Omega's preservation and progress today.

On August 7, 1933, a little over a year after taking the photo in Richmond, Brother Mazyck would enter Omega Chapter. Reflect and be motivated.