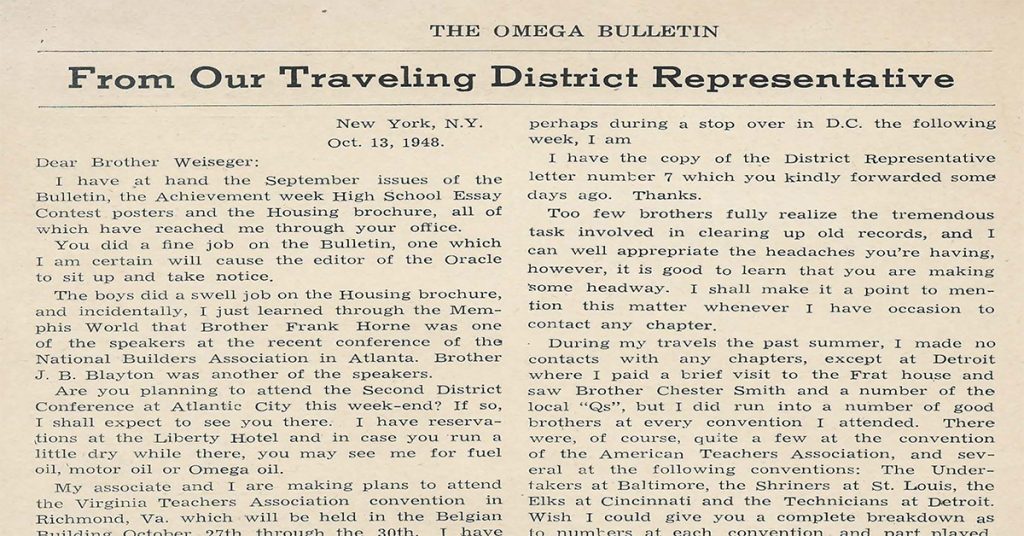 The Committee on Redistricting has given considered thought to the proposition that no single District Representative should have jurisdiction over more chapters than he can visit regularly and periodically. Good administration and supervision require a continuing contact with local chapters for the purpose of keeping alive the interest and progress of Omega. Of prime importance in trying to determine the limits of territory over which any one District Representative shall have jurisdiction, is the total number of miles which he can reasonably be expected to cover within the limits of the appropriation made for travel purposes, and the amount of time at his disposal for fraternity business. It seems particularly important that the kind and scope of organization be geared to these two factors.

The Committee went on to recommend the following district reorganization:

The Traveling Representative, perhaps more than any other fraternal experience, was manifestly Omega. Those who served in this position both experienced and strengthened the connective tissue between Friendship and Fraternity. Much of what these men experienced on the road interacting with brothers and chapter leadership on the front lines later informed enduring policy and programming at the district and national levels. For example, and as documented in the attached Oracle and letter of correspondence, Brother Oxley inspired much needed and renewed interest in the Omega program, while leveraging his experiences to shape those very programs. Moreover, Brother Blue is credited for instituting the “Round Up” and for creating the “Scroll of Honor,” both of which recognized the importance of purposeful brotherly engagement and ongoing contribution in the context of the Omega value system. Something tells me theirs was the ultimate road trip…the one envisioned by our Founders.

Although change is at times necessary, there are so many good things from our past worthy of preserving. On this Labor Day, the History and Archive’s Committee reflects upon and gives thanks to those who, like Brothers Oxley and Blue, have contributed and continue to contribute through their own personal labors to the betterment of Omega.