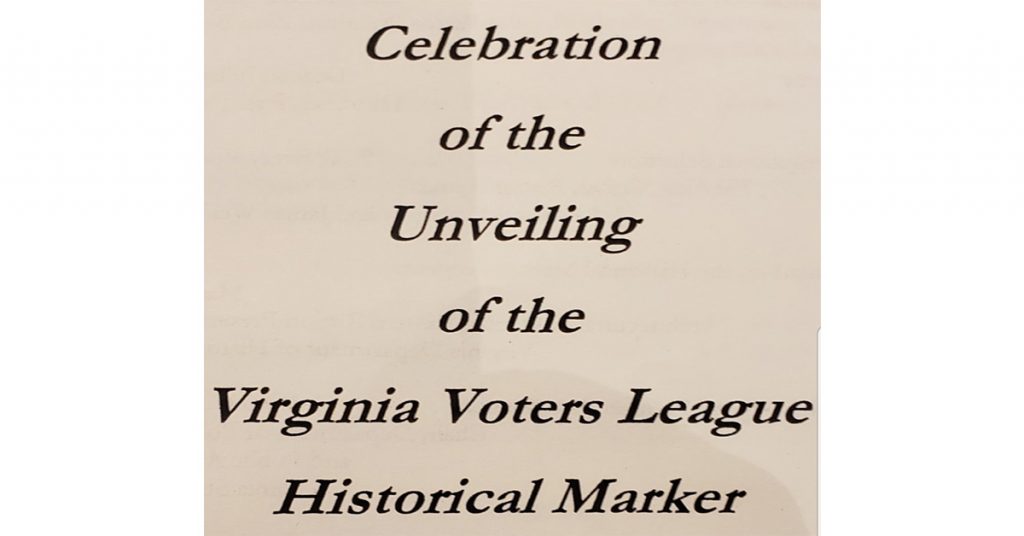 On yesterday, June 23, 2019, several brothers from Delta Omega chapter represented and honored the Fraternity’s legacy of leadership in the fight for civil rights through their attendance at the Celebration of the Unveiling of the Virginia Voters League Historical Marker in Petersburg, VA. The Third District History and Archives Committee thanks Brothers William “Tripp” Bland, Marlon Penn, Terrence Spence, Harold J. Haughton, Sr., former District Representative James Clark, Horace Webb, Craig Branch, and James Holden for representing Omega at this important celebration. Brother Spence, a member of the Third District History and Archives Committee, covered the event on behalf of the Committee and provided the following reflections, report, and pictures commemorating the event.

As I was preparing for what I hope will be the first of many submission to the Monday Pearl, I couldn’t help but to reflect on some of the challenges I have personally witnessed as a black man growing up in the late 60’s and 70’s in Baltimore, MD. I still vividly recall when Dr. King was assassinated and the profound impact his loss had on me, my community, and blacks nationwide.  It is with this backdrop that I was humbled and considered it a privilege to have attended the Unveiling of the Historical Marker for the Virginia Voters League held at First Baptist Church in Petersburg, VA.In March 1935, Brother Luther P. Jackson formed the Petersburg League of Negro Voters, which later (1941) became the Virginia Voter’s League (VVL). Jackson, along with fraternity members James P. Spencer, Raymond J. Valentine, and Robert H. Cooley, Jr. founded the VVL and through their efforts and the organization’s agency substantially increased black voting strength through voter registration and poll tax payments, at one point organizing voting clubs in 80 counties and 24 cities across the state of Virginia. These were serious men of purpose and consequence.The program consisted of a formal recognition from the Historical society of Virginia as well as remarks from a representative of each honoree’s family. Each family member conveyed their sincere gratitude for the display of appreciation in the recognition of the untiring efforts that these great men of Omega made; ensuring that all African Americans would have the power to exercise their right to vote. As a result of their efforts, these great men will forever be formally memorialized in the State of Virginia and throughout the nation for their trailblazing contributions to civil rights and social justice.I have attached a few pictures from the event and have provided content from the Third District Conference Meeting Minutes, 1946 Third District Memoir Book, 1949 Third District Conference Meeting Minutes, and an info packet on Brother Luther P. Jackson prepared by Brother Major Galloway for the Alpha Omega Lest We Forget fellowship program. I’ve also provided 16th Grand Basileus Albert W. Dent’s annual address printed in the March 1941 Oracle, which highlights Omega’s instrumentality in the advancement and betterment of mankind. You’ll note in the short, highlighted passage the Third District’s leadership in serious matters. When possible, I’ve tried to highlight the relevant content in each of the documents provided. Because some of the document file sizes are large, I’ve made all of the documents available for download by clicking on this link https://drive.google.com/open?id=1tA1dSfcFqsdViJgjQOZLIVz7Pvznh8l_.As we reflect on the historical significance of what these great men embarked upon let theirs stories of sacrifice as well as all men of Omega who have come before us be always looked upon as a great source of inspiration.

The Monday Pearl is provided by the Third District History and Archives Committee and is a weekly sharing of fraternity content, commentary, and research of historical value we hope Brothers will enjoy and from which Brothers will draw inspiration. Previous "Pearls" can be found at http://3rddistrictques.org/about-us/overview/monday-pearl/. The Committee encourages your feedback. Should you have reactions, comments, information, anecdotes, documents, and the like, related to any of the content we share, we'd very much like to hear from you. Please send all communication to 3dhistoryandarchives@gmail.com.