$5,000.00 donation to Delta Omega Chapter in support of its Male Protégé Program

On July 31st, 2021, the brothers of the Delta Omega Chapter, Third District celebrated 20 years of mentorship to the youth in the Tri-City area of Hopewell, Petersburg, and Colonial Heights. The guest speaker of the ceremony was the 28th 3rd District Representative Ezekiel Dennison, discussed how the program was initiated and commended the brothers that dedicated their time and leadership to the program over the past 20 years. The current District Representative, Brother Conrado Morgan discussed the success of the program and stated that Delta Omega’s program was the model program for the fraternity. Mr. Calvin Anderson and Mr. Jared Phelps of the Delta Omega Chapter TMPP provided candid remarks about their experiences in the program, including how brothers of the Omega Psi Phi Fraternity, Incorporated impacted their lives and created very positive conditions for the proteges to be successful in college and early adulthood. The Delta Omega Chapter, with the Delta Omega Foundation, paid tribute to Dr. Evalina Davis with a plaque given to her son, Brother Evan Davis. The Delta Omega Chapter TMPP 20th Year Celebration culminated two decades of a very successful program focused on social action and community outreach initiatives for young adults. The brothers provided excellent role models over the 20 years and passed on valuable life skills from college-educated professionals, leaving an everlasting effect on past and present young men. 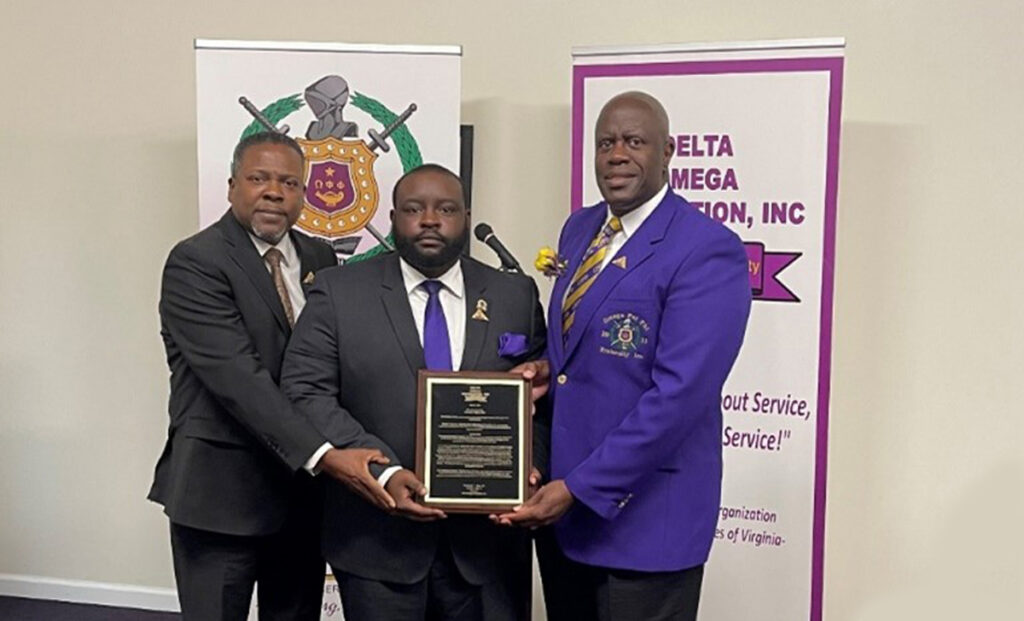 The Delta Omega Chapter, Third District of the Omega Psi Phi Fraternity, Incorporated, in collaboration with the Delta Omega Foundation, Incorporated, founded the Delta Omega Chapter Male Protégé Program (TMPP). The Brothers were recognized for their outstanding program. Brother Grand Basileus David E. Marion, Ph.D., 41st Grand Basileus, Omega Psi Phi Fraternity, Inc., was provided a copy of the July 31, 2021, ZOOM presentation of the chapter’s 20th Anniversary Celebration by the Third District Representative, Brother Conrado B. Morgan. After the Grand Basileus reviewed the broadcast, he indicated to the District Representative that he would like to see a more detailed TMPP presentation containing parent’s and protégés comments. After hearing the presentation, the Grand Basileus of the Omega Psi Phi Fraternity, Incorporated hosted a virtual meeting on August 19th, 2021, and presented a $5,000.00 donation to Delta Omega Chapter in support of its Male Protégé Program.

The Male Protégé Program (TMPP) is a Youth Mentorship Program, began in September 2001, with five protégés making up the initial cohort. There are twenty-two participants in the program. However, more than 300 male protégé participated over the past twenty years. The program seeks to instill the importance of putting God first in everything, being an upright man, a good father and family man, respecting others, and maintaining the right attitude in all situations.

The Omega Psi Phi Fraternity, Inc’s goal is to continuously improve the program, thus meeting the ever-changing needs of participants while recognizing societal challenges. College attendance and completion are highly encouraged, and for those not attending college, alternative avenues for professional and personal accomplishments are recommended.

Several protégés achieved significant milestones in higher and secondary education. Some of these professional careers, including Assistant Principal, Teacher, Attorney, Engineer, Entrepreneurs, and Department of Defense are just a few of the outstanding achievements attained by these young men. The brothers of Delta Omega Chapter and the Delta Omega Foundation are incredibly proud of the protégés’ accomplishments and their impact on this program. The program’s success led to its adoption by the International Headquarters of the Omega Psi Phi Fraternity, Incorporated as the model for all chapters to emulate. It has been Delta Omega Chapter and Delta Omega Foundation’s honor and pleasure to sponsor this program from its inception to the present. We have made a positive difference in the lives of many protégés and the protégés continue to make a positive difference in the community.