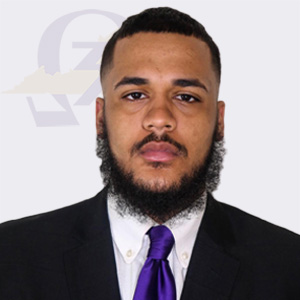 Brother Deondre Davis was initiated into the Nu Psi Chapter, Third District of the Omega Psi Phi Fraternity Incorporated on April 3, 2021. Brother Davis is a Junior Psychology Major from Dallas, Texas, by way of Chesapeake, Virginia. As a current student leader at Virginia State University (VSU), he has served as an Executive Board member of a social organization on the VSU campus known as P.R.E.P. Incorporated (Promoting, Representing, and Entertaining our Peers). Additionally, Brother Davis actively works closely with the NPHC and the Director of Greek Life at VSU. Brother Davis also has been committed and very enthusiastic when it comes to Uplifting the community since joining the fraternity in many ways more than one. Brother Davis started a volunteer program at the local Boys and Girls Club to mentor young boys to serve as role models. Brother Davis also volunteers as a mentor for Delta Omega’s Teen Male Protege Program T.M.P.P. and monthly at the Ettrick Food Bank, giving out food to those in need. These are a few things among many more which played a part in him becoming the recipient of the 2021-2022 Nu Psi Chapter and the Third District Superior Service Award winner.

Moreover, Brother Davis works full-time at a local group home called QLife Residential, where he is very active with his clients as a mentor and life coach. Additionally, Brother Davis even brings his clients on campus to enjoy college activities, sparking an interest in pursuing a degree. He is also a member of the Nu Psi Chapter step team and a student-athlete on the VSU football team. He has committed himself to performing the work of Omega at the chapter and district level, serving on the Third District’s Social Action committee, as the Vice Basileus of Nu Psi, and more recently as the Second Vice District Representative of the Third District as well as newly elected Basileus of Nu Psi chapter. Brother Davis plans to lean on his fraternal /personal leadership experience to best serve the Undergraduate brothers of the Third District and the fraternity. He sees himself as a servant leader with transformational leadership characteristics.